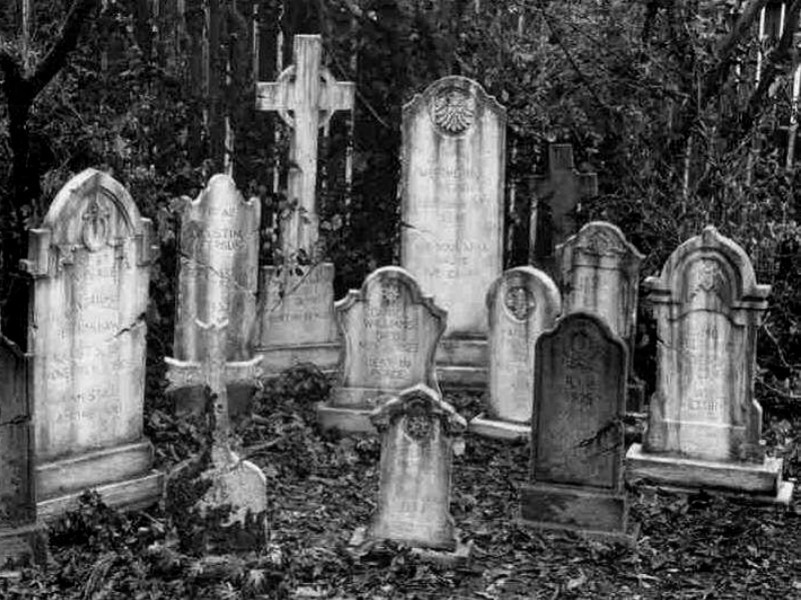 Bairdsville is a tiny community in the Upper Saint John River Valley, about one hour and a half above Fredericton, just south of Perth Andover. There is a beautiful Anglican Church, visible from the highway,named after St. George. A fairly steep hill rises from the north side of the Church and runs approximately 250 meters behind it.

A number of years ago, I attended a funeral thereand the burial which followed in the Church yard. The grave was half way upthe hill and we had a beautiful view of the river. At the end of the Committal prayers, there was silence. Not an awkward silence, but a lovely, peaceful silence,and gradually people began to make their way down to their vehicles. In the midst of that time of recollection, a lady said to me, “This will be a beautiful place from which to be raised up when Christ returns”.

I was thinking about that comment the other day when we were at Gray’s Island Cemetery for the Committal of Roy Boutilier’s ashes. Afterwe were finished I visited Debbie Ritchie’s grave. As many of you know, Debbie was the Secretary at St. George’s for many years, until her death in 2010. She is buried with her son, Robert. Beside her grave is Kathleen Balser’s. They were neighbours in Stony Creek and died in the same year –Debbie at 52 years of age,and Kathleen in her early 60’s. To the far left, near the tree line, I visited the grave of Ralph Black, friend of many,and long-time leader in our Congregation. Beside him, are the graves of his friends Vaughn and Doris Downing.

As I walked amongst the grave markers in the crisp stillness of the afternoon, reading names and epitaphs, these words of LCol John McCrae’s ‘In Flanders Fields’ came to mind:

“We are the dead. Short time ago we lived, felt dawn, saw sunset glow, loved and were loved, and now we lie in Flanders fields”.

But then a phrase from the last Committal prayer (page 603, BCP) presented itself: “who also hath taught us (by His holy Apostle Saint Paul) not to be sorry, as men without hope, for them that sleep in Jesus”. St. Paul refers to death as ‘a sleep’ for those who are in Christ. The early Christians were so convinced of this, having witnessed Jesus’ Resurrection, they began to call their burial places,‘sleeping places’ –or ‘cemeteries’ (from the Greek word ‘koimeterion’).

WOW! Very interesting! As those early Christians believed,wehave great hopebecause of our Lord’s Resurrection, and so do those whose graves I was visiting –the hope and promise of Everlasting Life through Jesus Christ our King and Saviour. The passage quoted in that Committal prayer is from 1 Thessalonians 4:

“But we do not want you to be uninformed, brothers, about those who are asleep, that you may not grieve as others do who have no hope. For since we believe that Jesus died and rose again, even so, through Jesus, God will bring with him those who have fallen asleep. For this we declare to you by a word from the Lord, that we who are alive, who are left until the coming of the Lord, will not precede those who have fallen asleep. For the Lord himself will descend from heaven with a cry of command, with the voice of an archangel, and with the sound of the trumpet of God. And the dead in Christ will rise first. Then we who are alive, who are left, will be caught up together with them in the clouds to meet the Lord in the air, and so we will always be with the Lord. Therefore encourage one another with these words.” (1 Thess. 4. 13-18, ESV)

According to St. Paul, there will be an order of rising when Christ returns: the dead in Christ (i.e.‘those who sleep in Jesus’) will rise first; then those who are left (i.e.as the Nicene Creed says,‘the quick’ –those who are alive on earth when Jesus comes again).

With faith in Christ, a walk in a cemetery can be a hopeful outing. Yes, it will be a time for reflection; and it will be sobering as well. But think of what St. Paul says, “The dead in Christ will rise first”. The best is yet to come! So let us pray, “Marantha! Come Lord Jesus, come quickly!”